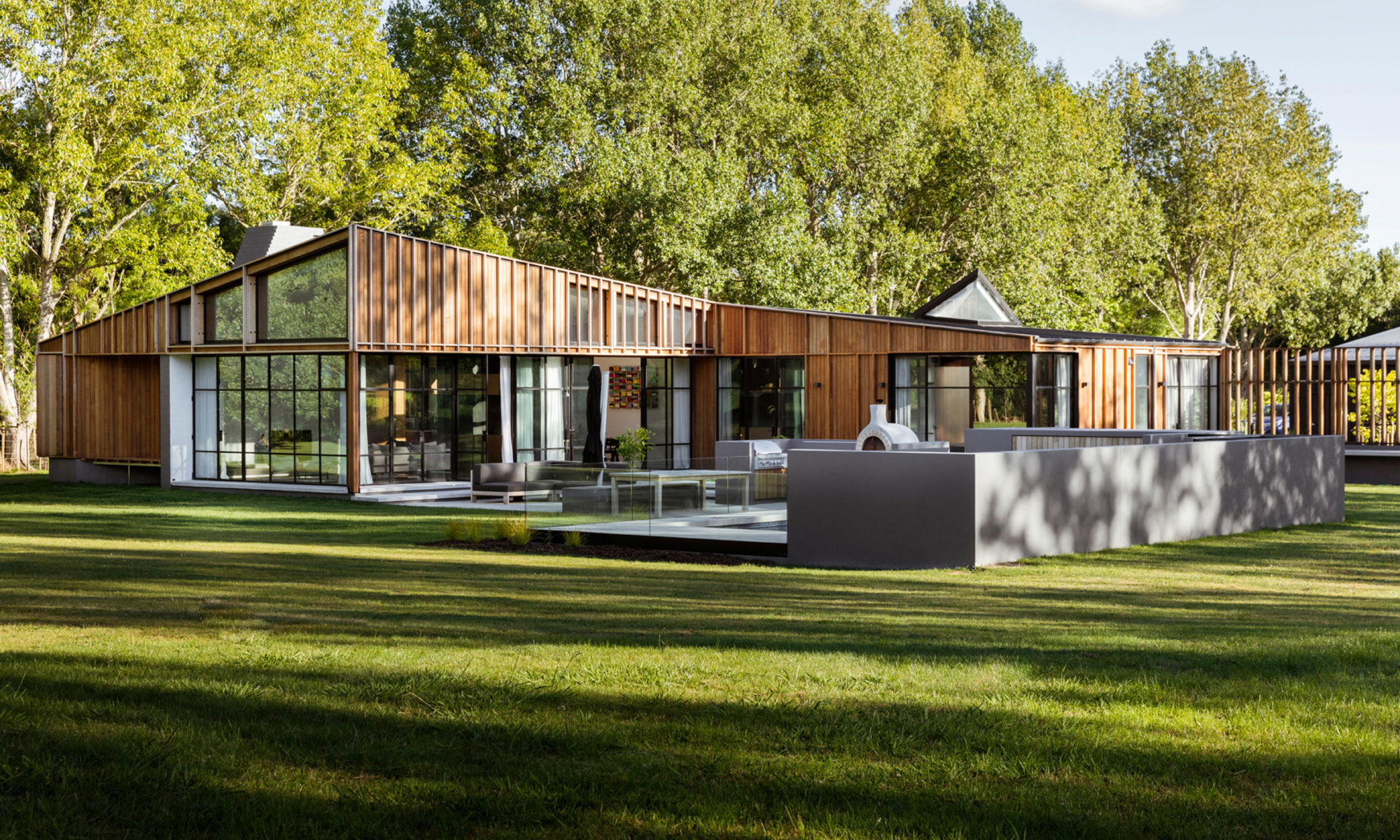 Glamuzina Paterson create an intriguing house in a sheltered Matakana paddock that is at once urbane and thoroughly welcoming.

Walking dull conversation across the threshold of a home is considered a social no-no in some circles. But entering a house that freely offers up visual dialogue cues may get the less verbally adroit visitors off the hook. 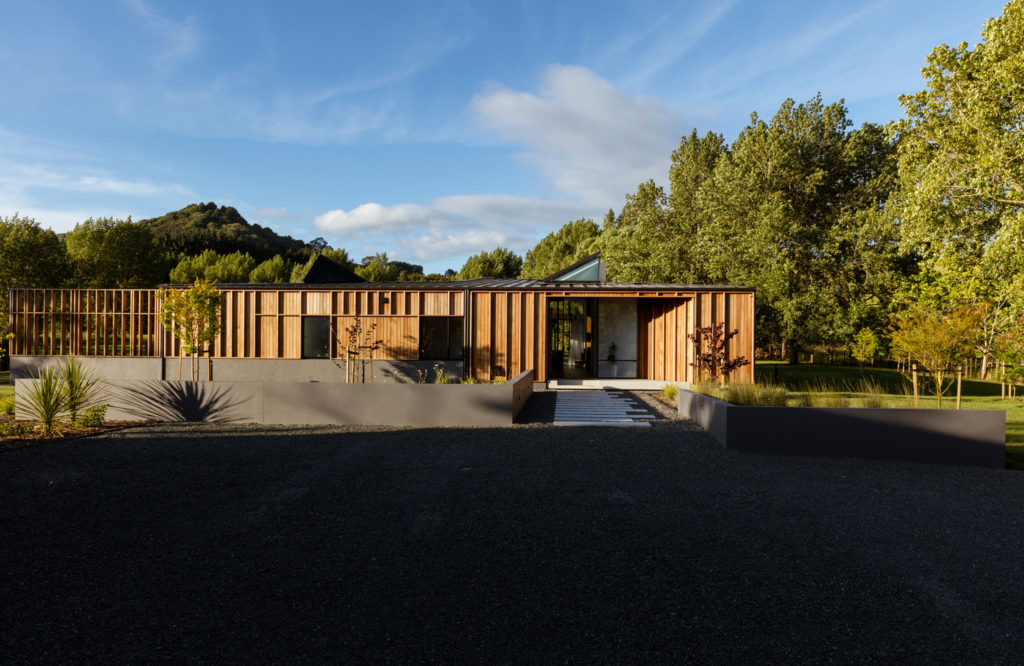 A flat rural field minutes from Matakana village and the mega mansions of Omaha, the site proposed a different approach to the weekender or bach typical of the area. Feeling confined by the tightness of inner-city living in Auckland, Jen Lander and her husband Mike wanted a retreat where their young children could connect with the land, a place that was open and unrestricted. They bought the section about four years ago and almost immediately engaged architects; a first-time project for the couple and one they took to with intellectual relish. They invited two architects to a tender process – to vet them for a comfortable working-relationship fit, as well as gauge their ideas. “Not many people do that but it’s becoming a more familiar process,” says Dominic Glamuzina, who designed the house while in partnership with Aaron Paterson at Glamuzina Paterson Architects. He was open to his new clients’ desire to be involved in design and they were open to some of his more “esoteric” ideas. “The original design we did is so different to where we got to, although intention was drawn back into parts of the existing design,” he says. “We talked about Mike’s interest in all steps of the food preparation process and worked with that as an armature.” As well as catering to Mike’s passion for cooking, the house needed to work for the family and other families as staying guests.

The next big question was how a building should grow out of the middle of a field. A wide expanse of grass, the site is cricket-pitch open, but exploiting scale wasn’t the point. Bound by trees and rural fencing, any neighbouring houses beyond are swallowed up by green. “We tried to create a boundary condition; a framework, a series of thresholds, both architecturally and esoterically,” says Glamuzina. By creating a dialogue between exterior and interior, a series of subtly shifting elevations, contrasts of depth and shallow, refuge and engagement, contraction and expansion, and a few oblique angles, Glamuzina’s house in a field has become much more than its essence – “a broken courtyard defined by an L-shape plan”.

Entering the property through a farm gate, an irregularly spaced framework on the cladding sits beneath a long, low roof profile that mimics the site’s topography. Peeking out on top, two skylights speak to the surrounding hills, one looking east and the other out west – “all-seeing eyes,” as Glamuzina refers to them. At the base of the building is a long, low brick and concrete foundation – its solidity drawing upwards to hold the windows. Tapering off at the western end of the home like an ellipsis, a screen suggests exposed timber framework and brackets the bedrooms. “The exterior cladding and its language had us thinking about how to connect these conditions back into the interior. The intention was to also consider qualities of light and the casting of long shadows throughout the day, which is reiterated by the depth of the battens.” 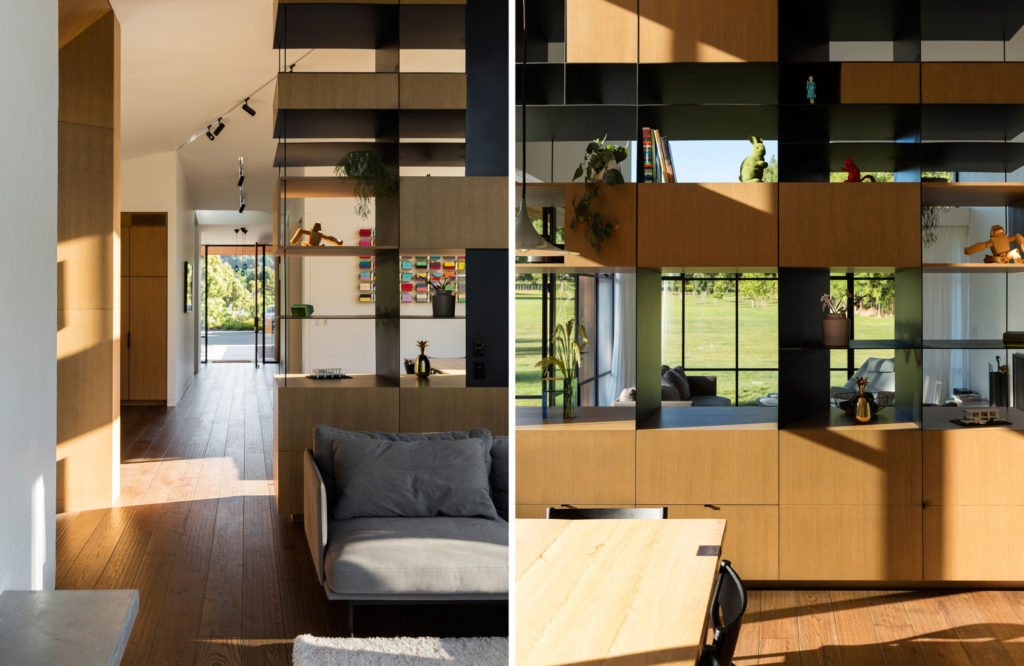 Through the tall front door, the relationship is clear. The eye immediately connects with the lines and irregular shapes of a deep floor-to-ceiling wall unit. The oak-and-steel showpiece acts as a divider between kitchen-dining and living and connection between inside and out. In solving how to differentiate and re-frame spaces within an open-plan environment, it underwent a litany of iterations. “It started off as a solid wall, then broke down into ‘that 70s unit’, then became a wall again before taking on an overt language that played out in the kitchen as well. We often talk about chess pieces in our practice, where larger elements can talk to each other but not be the same,” says Glamuzina.

Stopping short of this centrepiece is a generous space between the kitchen and dining area; a natural place for visitors to dwell and circulate before moving to the living area beyond or outside to the subtly sunken courtyard and a pool, which is drawn back into the home by a low retaining wall. But you’d be hard pressed to resist taking the steps behind the kitchen wall. They lead down, following a curved wall that scoops you into the snug – an area of contemplative contrast compared to the openness and light elsewhere. 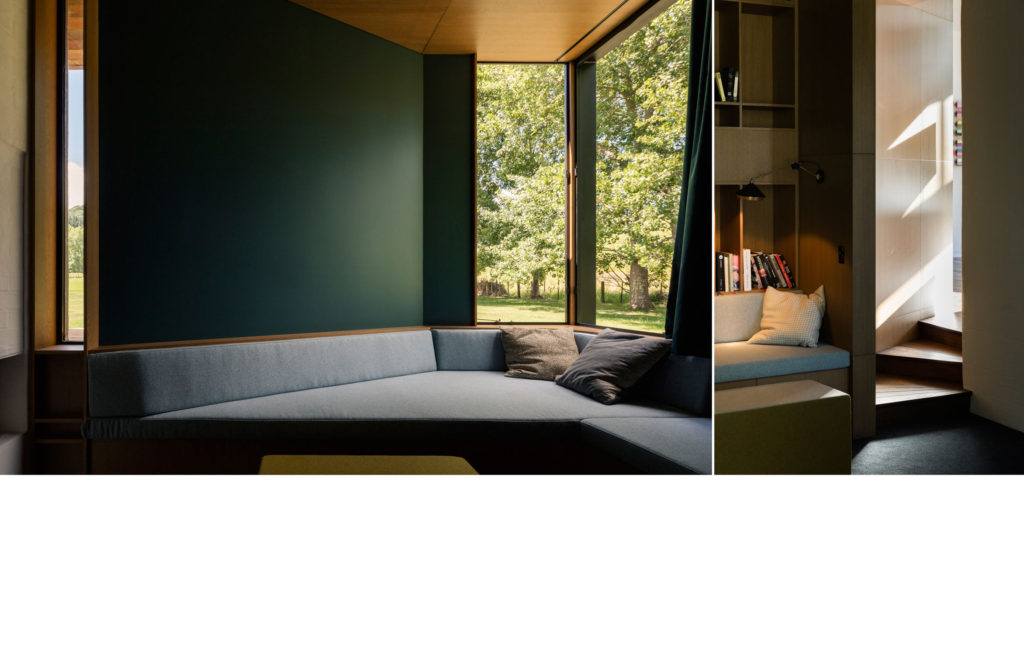 With its bookshelves, clever windows and angles, the snug is very grown up, though the kids see it as a readymade cubbyhole, says Lander. There’s another surprise back in the entrance hall where two tall doors are easily mistaken for storage, but which open into the kids’ play area and bunkroom that spills out into the courtyard. 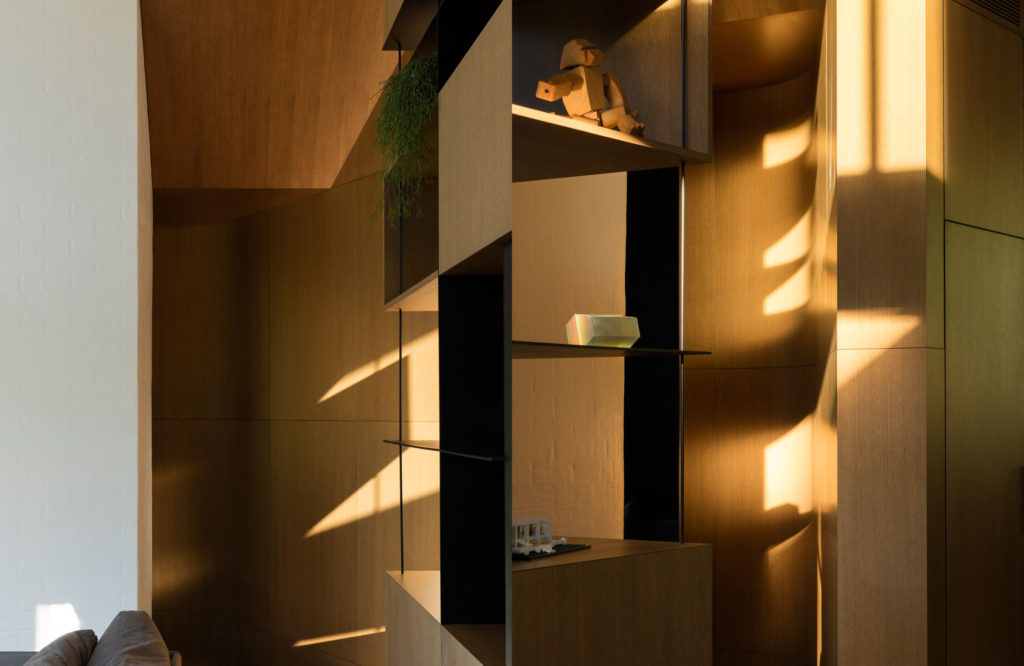 As well as inserting complex geometry and light, Glamuzina deliberately placed the skylights to occur at intersections – the first being inside the entrance. It cues movement into the body of the home; heads east to service areas and an office; and west to bedrooms and bathrooms. Along the west passage, geometry breaks up the idea of hallway as just plain functional, widening as it peels off into rooms. The dormer drops shafts of light into the space, shapeshifting throughout the day. With clerestories, dormers, picture windows and exterior battening, the interplay of light and shadow constantly changes. The house is evolving, too. Though the build is finished and Mike can indulge his love for cooking, both indoors and out, he has discovered a new passion – landscaping, and has plans to plant an orchard. “We often think about the next phase,” says Lander. “We’re a long way from being finished – but that’s part of the enjoyment of being here.” And the children, once timid around the building’s periphery, now run as far as the boundary will take them.